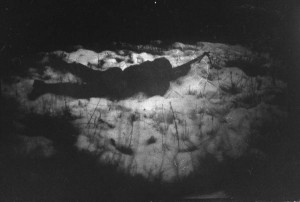 On a snowy February night in 1940, William Miller’s speeding car careened off an icy road near his hometown of Harrisburg, PA. He was ejected through the windshield and landed in a snow bank, unconscious. Fortunately, a man named Warren Felty was driving by, found him, and took him to a hospital.

But this wouldn’t be the last time Warren Felty would pull William Miller’s unconscious body from the snow.

Five short years after Miller was rescued from his snowy death, he found himself in trouble again…this time in Nazi-controlled Europe. The B-17 he piloted for the 94th U.S. Bomb Group had been shot down on its very first mission over Germany. Within weeks of his capture – and during the dead of winter – he and the other half-starved Allied POWs were forced onto a “death march” to Spremberg, Germany as the Nazis retreated from the advancing Russian army.

In January of 1945, the temperatures were below zero in what meteorologists called the worst blizzard in 80 years. Prisoners were dropping out of line, falling into the snow, and dying of hypothermia. On the second day of the march, even a few of the German guards started falling by the wayside.

Dropping everything except a small bit of food, Miller tried to keep up with the retreating prisoners. But his hands and feet were so numb from the weather that he eventually collapsed into the snow on the side of the road. The last thing he saw was the group moving on without him. Then he passed out in the snow…certain death in those freezing conditions.

“Someone was kicking and shaking me and pulling me to my feet. Incredible as it may be, it was Warren Felty of Middletown, Pennsylvania, the same person who had saved my life five years and 4,000 miles away, under just about identical circumstances.”

Warren Felty had also become a B-17 pilot – but with the 96th U.S. Bomb Group – and had also been shot down over enemy territory. Like Miller, he had been taken prisoner and was put on the same forced march. Felty helped the weakened Miller safely reach Spremberg where both men were liberated at the end of April, 1945.

But even this wouldn’t be the last time Felty would save Miller.

Years later, back home in Pennsylvania, Miller pulled over to have breakfast at a roadside restaurant in Harrisburg. His company had just lost its distributor and that threatened the future of Miller’s income.

Warren Felty was driving by the same restaurant – one he’d never visited before – and decided to pull in for a bite. Inside, he saw Miller, learned of his plight, and within two hours’ time, had arranged for his own company to be the distributor that Miller needed.

Talk about an ever-present Good Samaritan.

Did He See God…or Not?